Supplements you should be taking to minimize PMS symptoms

All of us menstruating humans are all too familiar with that dreaded time of the month. PMS can lead to an intense cocktail of painful and unpleasant symptoms that can really get you down, to say the least.

Although PMS is not completely unavoidable, there are some simple ways of successfully reducing the symptoms. Aside from eating chocolate, drinking ginger tea and using a hot water bottle with some pain killers in your system, what else can you do on top of these standard measures?

We will be exploring different supplements for PMS and their benefits. Before we get into it, let’s start with the basics.

PMS, or premenstrual syndrome, is a monthly cycle of symptoms that begin about a week before your period starts. These symptoms tend to go away within four days after starting your period.

However, PMS looks extremely different for each individual and every women seems to have her own obstacles to deal with at that time of the month.

PMS can affect you both mentally and physically. It is very unique from person to person and the symptoms can differ each time you are menstruating.

Here is a list of some symptoms that can be caused by PMS:

As I said, the severity of these symptoms vary. In more unfortunate cases, some individuals experience a more intense form of PMS called PMDD (premenstrual dysphoric disorder).

Those who suffer from PMDD experience at least 5 of the above symptoms at an incredibly intense scale, making day-to-day tasks basically impossible.

Although we are not sure of the exact causes of PMS or PMDD, it is believed that they are likely related to drastic changes in your estrogen and progesterone levels; two hormones that play a massive role in your menstrual cycle.

Anyway, let’s move on and go over some of the best supplements for PMS.

There are three specific categories I can suggest for reducing PMS symptoms; minerals, vitamins and mood stabilizers. Unfortunately, when we menstruate, we bleed out a lot of essential minerals/vitamins and our mood can feel completely out of wack.

Bleeding out these essential minerals and vitamins each month can make your levels dangerously low. Let’s look at a few specific supplements for PMS and why you may want to consider giving them a go the next time your period starts.

Magnesium – PMS can often lead to low levels of magnesium. A 2010 study found that supplementing magnesium helped the participant’s ease their symptoms. They saw a decrease in symptoms like depression, anxiety, water retention, breast tenderness, and insomnia. This makes magnesium an all-around helpful supplement to have available during that time of the month.

Calcium – Your calcium levels may change throughout your menstrual cycle. A clinical trial from 2017 found that calcium supplements helped to reduce PMS symptoms, such as bloating and fatigue. Additionally, they concluded that supplementing calcium had a positive effect on reducing psychological PMS symptoms including sadness, mood swings, and anxiety.

Iron – Women typically need more iron than men in order to make up for the amount of iron lost during menstruation. Approximately 1mg of iron is lost for every day spent bleeding. While PMS itself can result in dizziness and fatigue, a lot of those particular symptoms could be amplified if you are not eating iron-rich foods or supplementing the vital mineral.

Vitamin B-6 – Taking this supplement is not only great for your physical health, but it can also assist in dictating your mood. Vitamin B-6 is highly involved in the production of neurotransmitters, which play a big role in your mood. Several studies have found that taking a daily vitamin B-6 supplement may help with many of the unpleasant psychological symptoms of PMS including moodiness, anxiety, irritability, and more.

Ginkgo Biloba – Another effective mood stabilizer. Ginkgo biloba is without a doubt best known as a herbal remedy for improving memory and wellbeing. In 2009, a clinical study was conducted that evaluated the use of GB for treating PMS. The researchers found that taking 40mg tablets (3 times each day) reduced the severity of both physical and psychological PMS symptoms drastically.

CBD – One of over 100 cannabinoids found in the cannabis and hemp plant. CBD is non-psychoactive and extremely low-risk. Over the years, it has been demonstrated in various studies to offer powerful anti-inflammatory effects, making it a suitable aid for pain, even on extreme levels. Not to mention it is also widely used as a well-being supplement and may improve brain health. It comes in oils and capsules and is becoming more widely available as we learn more about the effects of this helpful cannabinoid.

There are plenty of other ways to reduce PMS, such as going for a walk, avoiding caffeine/alcohol, doing light yoga, etc… Although some of these methods work wonders for some, everyone is totally unique and requires different care during their time of the month.

I struggled with extremely severe PMS my entire life until I turned 20 and started to put a lot of effort into minimizing these symptoms as much as possible because, well, I had quite simply had enough and decided it was time to try everything I could think of! I experienced my greatest success with this mission when I learned the most helpful thing is to combine multiple methods.

I wish it was as easy as taking one pill or going for one walk… Unfortunately, that does not seem to be the case for most of us. My best advice is to experiment and try a collective of things until you find out what works for you and what doesn’t.

Women spend (on average) 3,500 days bleeding. That equals around 10 years… Yes, you read that correctly! We spend 10 years of our lives bleeding! That being said, it only makes sense to do what we can to minimize the suffering it can cause. Our lives are so very finite and we owe it to ourselves to decrease unnecessary suffering whenever possible. You cannot stop yourself from bleeding once a month but you sure can make it a lot easier on yourself. 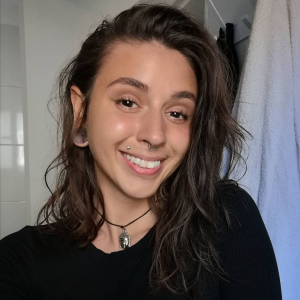 Sydney is a key member of our writing team. As an advocate for health, wellness and personal growth, she brings a wholesome touch to our blog section. You can expect positive, light and encouraging content from any piece of writing that comes from her!